It’s really a warning post. From me to you. Because the next time you decide to reconnect with friends you haven’t seen in a decade, for goodness sake, don’t act like a doormat.

Which isn’t to say that I usually act like a doormat. In fact I haven’t acted like one since I wore braces and, believe me, that was a very long time ago. So I am not really sure what happened. Maybe it was too much sangria.

Or too much humidity. Summer heat in Boston could do that to anyone.

But anyway, here is what happened. I paid $70 for two salads – one for me and one for my daughter – and a couple of glasses of sangria. Sure the salads were great, all locally grown, sourced, and whispered-to but there were no truffles involved and I wasn’t eating at the Mandarin Oriental. The sangria too, although deliciouzzz and made with berries, didn’t come with gold dust.

So why did I pay what would be the equivalent of several movie tickets for two salads? Because my friend Anna* and her daughter Emily* asked the waiter to split the check. And because they had an oyster starter, a main dish, and a dessert. Each. And because even though I suggested that we split it more along the lines of what we all ate, I must have suggested it very quietly. Or else they pretended they didn’t hear me.

And I didn’t protest. Which honestly ticks me off a lot more than subsidizing other people’s dead mollusks. Because it was wimpy of me and I hate being wimpy. Also I hate being screwed.

Sure, what happened wasn’t that unusual. People split checks all the time and sometimes you go out with douchebags that like to take advantage. Even sitcoms have been made on the subject and I am pretty sure George Costanza complained about it on Seinfeld. And maybe I didn’t speak up because I didn’t want to be George. Because, let’s face it, no one wants to be George. Jerry – maybe. Elaine – definitely. Kramer – nah. But George? Definitely not.

I digress though. Once the damage to my wallet and to my faith in both this friendship and my guts was done I wanted to punch so many things. But mostly I wanted to punch my own face. For being stupid. For keeping quiet. For allowing an asshole to be an asshole. 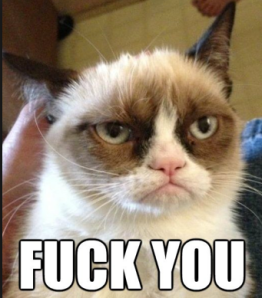 Nothing like a douche for a friend to remind you of having a voice. It’s a good system, totes recommend.